Nighttime, night lands all good jumping off points for a sleep podcast. Instead I get fixated on Taylor Swift's “Shake it Off” and keep exploring tangential threads that bring me back there. Don't worry there will be plenty of mind numbing moments to break it up. 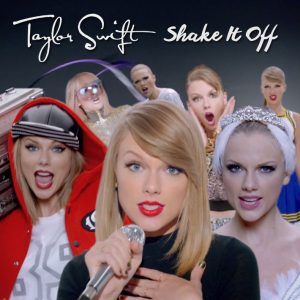 Article about “Sleep With Me” on Matter by Bobby Finger

In an attempt to reduce the super boring over-reliance on wikipedia articles we now have some a “Glittering Researcher” Stacy who is generously helping out. Here's Stacy's outstanding work this week-

Do spiders have hair? (Could be short article)
I'd recommend that you not talk about spiders on the podcast actually since this is one of the most common phobias.  Animal phobias are the most frequently occurring phobias (4.3% of the total population have JUST animal phobias – Becker 2007).  Spider fear has been used in research to examine behavioral approach/avoidance patterns (Rinck 2007).  This was done by asking participants to move a joystick either toward or away from an image of a spider on a computer.  People with spider fear were much quicker to move away from a spider in this way, and much more hesitant to move toward it when asked to approach.  Approach/avoidance patterns are used to gauge peoples' gut reactions to stimuli, as they tend to be a totally non-conscious reaction – they do not need any conscious thought in order to tell the body to move away.  People who have animal phobias such as spider phobia are more likely to also have co-occurring mental illnesses – particularly anxiety and mood disorders, but also somatoform disorders (unexplained pain), substance abuse, and childhood onset mental illnesses (Becker 2007).  That being said, spider fear in particular (as opposed to animal fear in general) is not as clearly linked with other mental illnesses aside from animal phobias (Davey 1991; http://www.tandfonline.com/doi/abs/10.1080/08917779208248798#.VGZApfldVqU); a bad experience with a spider is not typically the cause of spider fear, and spider fear is particularly resistant to treatment.
That being said, spider hair is called sensilla I believe. See attached (Barth 2004) for a thorough discussion on how these hairs work.
Temperatures/conditions that cause lethargy and why we get lethargic.
Taken directly from the article (Fakuda 1994) – “Chronic fatigue syndrom is a clinically defined condition characterized by severe disabling fatigue and a combination of symptoms that prominately features self-reported impairments in concentration and short-term memory, sleep disturbances, and musculoskeletal pain.  Recent longitudinal studies suggest that some persons affected by the chronic fatigue syndrome improve with time but most remain functionally impaired for several years.”
I found an awesome fatigue scale that's extremely commonly used to assess lethargy in research.  Here are some of the items:
This scale divides fatigue into several groups: General fatigue, physical fatigue, reduced activity (vigor), reduced motivation, and mental (cognitive) fatigue.  This scale has been shown to be a valid measure of fatigue, particularly due to how well it correlates with behavioral data- namely, how well people are able to perform on a vision test (Lin 2009).
Causes for fatigue that I found interesting:

The rest of the links (my research aka lots of wikii)

Older “Game of Drones” episodes can be found here

Sleep With Me is a bedtime story designed to take your mind off of the racing thoughts that keep you awake at night.

As you listen you will find yourself distracted from your worries and drifting off into dreamland..due to the fact the story gets a little bit more boring with each passing minute.

This podcast is a little weird, a bit silly and a tad offensive so beware. It is very similar to ASMR or guided meditation bedtime story that slowly carries you off to slumber.

“Sleep With Me” is a groundbreaking podcast created to help you fall asleep. So get in bed, press play and drift off into dreamland. If you struggle with insomnia or just getting a good night's rest, you've found the podcast for you.

Music by Christopher Postill @ Sounds Like An Earful Podcast “A Podcast about collecting stories, tinkering with noises and fumbling with really big questions”

Sleep With Me Artwork by His Grace Scott

“Game of Drones” Only Feed Cover Art by Ken Ackerman